Let’s face it. You’re probably sitting at your work desk trying to figure out how to pass the time until you punch out for the week. What happy hours to attend? Where is the next vacation spot? What are the fantasy stocks for players this Sunday? Well you’re in luck because the stocks are in for Week 7! We will recap the how the market faired last week and look towards who you need to be buying and selling before Sunday.
END_OF_DOCUMENT_TOKEN_TO_BE_REPLACED

Growing up, I was an outdoor kid, always playing some form of sport requiring a ball and competition. Usually the games involved me pummeling my best friend, Adam, who was almost a foot shorter than I was; we bounced from basketball to baseball on the front lawn to one-on-one touch football. Occasionally he’d sneak a win, but usually the outcome was a forgone conclusion. Unless it rained… When the weather turned sour, we’d head inside to pursue our other passions: Tecmo Super Bowl (which later evolved into Madden,) and Monopoly. It was on the Monopoly board that Adam exacted revenge.

It’s funny to think about someone being “good” at Monopoly, a game hinged on the roll of dice, but Adam is. (There’s more math and strategy involved than I ever thought about.) While I was chasing hotels on Boardwalk and Park Place, Adam would quietly be amassing properties on the “free parking” corner: the orange and red squares. Nearly every time we played, he would broker a deal to send Park Place to me in exchange for Illinois Avenue with St. James thrown in; and every time, I would bite, chasing the upside potential of the most expensive properties on the board.

Recently, we were reminiscing, and I mentioned those trades and how he would always manage to squeeze every last dollar out of me during our marathon Monopoly battles.

“Well, yeah,” he said. “You’re half again as likely to land on Illinois. There’s like a 2% chance of landing on Park Place. Illinois is around three and a quarter.”
END_OF_DOCUMENT_TOKEN_TO_BE_REPLACED 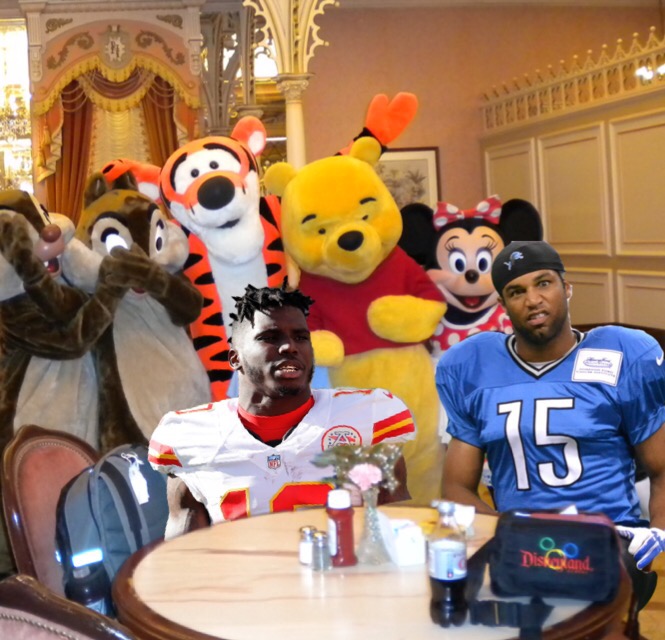 Did you know that Disney’s restaurant reservations can book solid for three months within minutes of coming open? I’ve got two boys under 4 who are wild about Disney. (My youngest is currently walking around, wearing my SFB7 t-shirt like a kimono, proudly pointing out, “Cinderella’s Castle!” They love Goofy, Pluto, Nick Wilde, and Mater; but the real star, of course, is Mickey Mouse. If we don’t see another character on our entire vacation, it will still be a success as long as there’s a meeting with the Mouse.

So here I am, in the middle of writing a Tyreek Hill versus Golden Tate article, brow furrowed, (occasionally swearing under my breath,) trying to navigate the DisneyWorld dining reservations website to secure a breakfast with Chef Mickey… in December. And there are zero spots available; every day of our week-long vacation is booked solid. Frantic, I look again. There are other restaurants, of course, and they would probably be terrific. There might even be a better place to eat, but I know what I’m getting with Chef Mickey and his mouse-ear waffles.
END_OF_DOCUMENT_TOKEN_TO_BE_REPLACED

Full disclosure, Cooper Kupp has been my favorite player to watch out of all the receivers I’ve looked at so far. (That’s not to say that he is the best, but he’s got, as the French and Matt Kelley would say, “je nai sais quoi.”) Immediately Kupp has two strikes against him- age and the Big Sky Conference, and I don’t care.

END_OF_DOCUMENT_TOKEN_TO_BE_REPLACED

You’ve got to do a little extrapolation if you’re going to fall in love with JuJu. Sandwiched in the middle of two modest seasons is his 1400 yard, ten touchdown sophomore effort of 2015. From what I’ve seen so far, he is a little bit tumultuous in a world where consistency is king. END_OF_DOCUMENT_TOKEN_TO_BE_REPLACED

John Ross is fast. Seriously fast. If you believe the unofficial times, 4.25 fast. And when he’s not getting pressed at the line, he combines and initial explosion with elite straight line speed to burn defenders over the top. Think Will Fuller-ish, but with better concentration and hands… although perhaps John Brown is a better comparison with DeSean Jackson as a pie-in-the-sky upside comp. END_OF_DOCUMENT_TOKEN_TO_BE_REPLACED

Henderson is another unheralded receiver who has a chance to catch on somewhere and eventually see his roll expand. His stock will definitely be contingent on his measurables and landing spot; although I’ve been hearing occasional whispers out of the Matt Harmon camp that Henderson is a “reception perception guy” so his under-the-radar status may be in jeopardy. END_OF_DOCUMENT_TOKEN_TO_BE_REPLACED 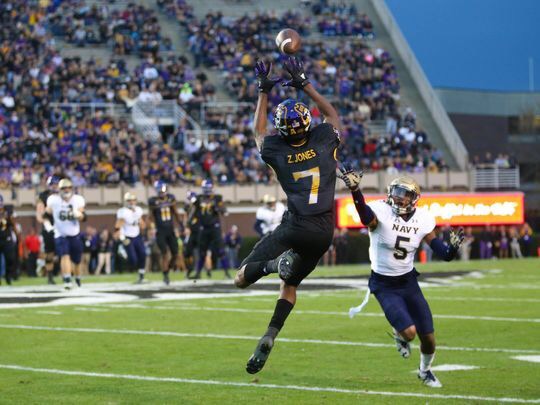 I try to go into a session of film watching with as much rationality and as little bias as possible. Basically, I want to look at a guy like it’s the first time I’m seeing him play.) (Usually it’s impossible not to have at least some preconceptions about a player; Zay Jones is the perfect test case.)  END_OF_DOCUMENT_TOKEN_TO_BE_REPLACED

Ford is closer to the size of receiver that traditionally excites NFL teams and draft analysts. He’s a physical outside receiver and not afraid to block. He beats corners with a fairly even combination of speed, size and strength. END_OF_DOCUMENT_TOKEN_TO_BE_REPLACED

This class of receivers is much maligned, but I am starting to think that there are several potential diamonds who are going to be drafted. Ka’Darius O’Keith Cannon is the first of these. Up front, I’ll tell you KD is a project; he enters the NFL saddled with the stigma of the dreaded minimalist Baylor route tree.  END_OF_DOCUMENT_TOKEN_TO_BE_REPLACED